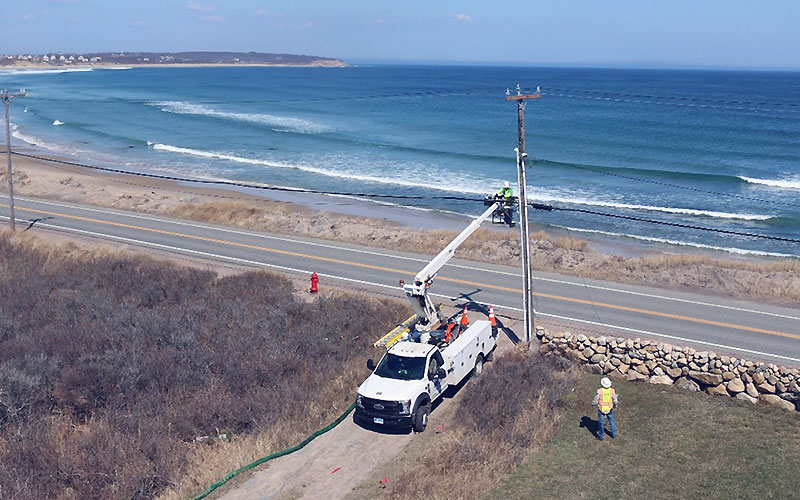 Block Island has long been a community of innovation. Located 15 miles off the Rhode Island coast and accessible only by boat or plane, its residents embrace a pioneering spirit found in few other places. The Town of New Shoreham, the island’s sole municipality, is home to the nation’s first offshore wind farm and soon will host Rhode Island’s first municipally owned fiber broadband network.

Block Islanders have struggled for decades with poor telecommunications service. While the community desired and demanded better connectivity, traditional providers had no interest in serving the small community of 1,000 year-round residents, even though the population swells to 20,000 during the summer season.

Businesses and residents desperate for bandwidth found ways to enhance their dismal 15/3 Mbps upload/download speeds using satellite and other improvised solutions. Though these enhancements marginally improve service, islanders continued to limp along with unreliable DSL, and no one was satisfied.

When the Block Island Wind Farm went live in 2016, it presented an opportunity for the community to solve its connectivity problems with fiber.

Guided by the New Shoreham Broadband Committee, the town tapped into the wind farm’s undersea fiber optic cable to build a community anchor institution (CAI) network connecting the library, safety complex, town hall, and medical center in 2018. The vision to expand the network island-wide was a distant goal until the pandemic hit. Suddenly, the project became an urgent and shared priority.

Rather than waiting for promised federal grant funding – or simply doing nothing – island residents voted in July 2020 to build BroadbandBI, a universal fiber network. It was a considerable risk, but one that taxpayers overwhelmingly approved taking.

The package approved by voters authorized $8 million in tax-supported bonds backed by New Shoreham’s creditworthiness. Voters made the commitment regardless of whether there would be future financial assistance from federal grants.

“As with any utility, our goal is to set rates for a recapture that cover our costs and create a viable, sustainable framework to operate the utility long-term,” explains Amy Lewis Land, finance director of New Shoreham.

Multilevel service tiers created by the town are designed to provide options for Block Islanders and recognize the community’s needs and priorities. Even with recovery costs baked in, monthly rates for best-effort plans are significantly less per month than customers typically paid for insufficient legacy services.

“The town should take a great deal of pride in what it is accomplishing with this project – from the unanimous community support to facing down the challenges of a pandemic, including disruptions in workflow and supply chain,” says Maryanne Crawford, New Shoreham’s town manager. “We’re plowing new ground as one of the few towns [in the U.S.] that has done such a comprehensive project pretty much entirely on its own. It’s extraordinary.”

Sertex is proud to be New Shoreham’s partner in building and operating Block Island’s fiber optic network, expected to be operational in late 2022 and early 2023.